Young people make a positive contribution and deserve so much better

“If elected I pledge I will protect the reputations of young people here in Haringey by ensuring I promote the positive contribution they make to our society.”

This is the pledge I signed recently for Positive Youth News Haringey.

Read my answers to some of the questions they recently put to me online, below.

Watch my short film (2 mins) about my pledges for young people here. 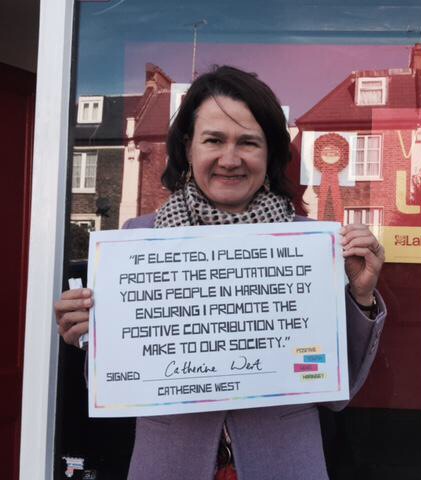 1. Politicians always attack our youth centres when making cuts. What would you do to protect them?
We’ve certainly seen young people’s services come under sustained attack from this Tory-led government, whether it’s scrapping Educational Maintenance Allowance, tripling tuition fees or downgrading apprenticeships. They’ve targeted their cuts at deprived areas like Haringey so the council has lost £180 million since 2010, much more than some of the leafier suburbs. That’s put huge pressure on vital but non-statutory services like youth centres. It’s not right and if I’m elected I’ll be fighting for a better deal for our community.

2. Young people are the lowest voters. What can you do to increase voting participation?
When I was Leader of Islington Council we held borough wide elections for a Young Mayor and Youth Council. They were given a budget and real responsibility to look at how we allocated funding for youth services. People got involved because they could see the point. I find that young people are very engaged and care passionately about issues like jobs, housing or cuts to services – I’ve had lots of young people getting involved to support my campaign. But we need to work much harder as politicians to make young people see that what happens in Westminster has an impact on their lives.

3. Do you support votes at 16?
Yes, and a Labour Government would give all 16 and 17 year olds the vote by May 2016. I’ve met so many young people that have been affected by decisions this government have made like scrapping Educational Maintenance Allowance or cutting careers advice. It’s not fair that they don’t get to have their voices heard.

4. Do you think it is fair that there is a different minimum wage if you are under 18?
I wouldn’t want to see it made harder for young people to find work as that first job is so important to gain experience. What we need is a higher minimum wage for everyone – and incentives for companies to go one step further and pay the Living Wage. We also need to make sure the minimum wage is enforced. One in five young apprentices aren’t even paid the appropriate minimum wage but this government has done nothing about it. There have only been two prosecutions since 2010, we need to get much tougher on companies that don’t play by the rules.

5. When are we going to see real jobs not just supermarkets or sales?
Under this Tory-led government we’ve seen a huge rise in low paid, zero hours, insecure jobs even for people with good degrees. Youth unemployment is over 700,000 and fewer people are starting apprenticeships. It’s a massive kick in the teeth if you’ve worked hard, got the grades and then there’s no decent jobs at the end of it all. Under Labour, every young person who gets the right grades will have a right to a high quality apprenticeship. We’ll also increase the minimum wage which will have a positive effect on the labour market for graduates as well as those going straight into work from school.

I want to see responsibility for employment devolved down to a more local level. At the moment we throw millions at big national employment programmes that aren’t very good at getting people into work. If we spent that money locally, worked with people who know the local labour market, know what skills are needed, we’d be much more successful.