We must protect the environment and tackle climate change. Like Ed Miliband I think this is the single most important thing we can do for our children 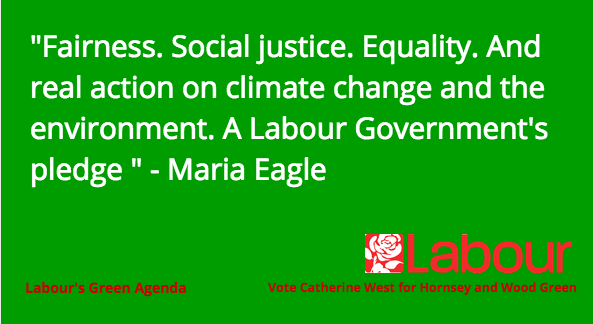 We must protect the environment and tackle climate change -; I passionately believe this. This is the single most important thing we can do for our children and grandchildren.

In Islington I oversaw local initiatives like Bunhill Combined Heat and Power network which provides cheaper, greener energy to over 700 homes in the area and led Islington Council to become the first 20 mph borough in London. I want to see people in Hornsey and Wood Green benefit from innovative solutions like this.

Labour will support the growth of green innovation by giving the Green Investment Bank new powers to support investment in green businesses and technology, making Britain a world-leader in low-carbon technology.

We are committed to passing legislation requiring all electricity to be low-carbon by 2030. But I would like us to go further. I want to see all coal stations incorporate Carbon Capture and Storage (CCS) Technology by 2025 or close down. CCS will mean that up to 90% of CO2 emissions produced by the use of coal to generate electricity will not enter our atmosphere. It’s an ambitious goal, but one which is absolutely worth striving for.

Labour has always recognised the importance of striving for better climate change policy. We introduced the first legally binding emissions reduction targets in the Climate Change Act 2008. In 1997, Labour Ministers played a central role in the Kyoto Agreement, and Ed Miliband, as Climate and Energy Secretary, helped to secure agreement at the Copenhagen Climate Conference in 2009. We don’t just talk about green policies, we deliver green policies.

This Tory/Lib Dem government has gone from promising to be the ‘Greenest Government ever’ to quietly abandoning any meaningful action on climate change.

Action to limit and reverse the damage we are doing to our environment must begin at an international level, where Labour will make Britain a world leader in the battle against climate change once more. We will push for a binding international agreement to hold warming below two degrees. This will ensure that our global emissions peak in 2020 and then rapidly decline to net zero emissions by the second half of this century.

The number of households with children living in fuel poverty in England is at its highest ever and since 2010, energy bills have increased by £300 for the average home leaving many households struggling to pay their bills. As well as freezing energy bills until 2017, Labour will provide free energy efficiency improvements to households in Hornsey and Wood Green which are in, or at risk of, fuel poverty.

Private rented homes too often fall below standard, leaving tenants paying costly energy bills to heat inefficient homes. Labour will introduce a new target for landlords to upgrade their properties to a minimum standard of Energy Performance Certificate ‘C’ by 2027 as well as working with industry to set a date for all new homes and commercial buildings to meet zero-carbon standards.

We must make serious progress on climate change in the next Parliament. Not only does it protect the future of our planet, but the positive effects will be felt within our local area. Our air will be cleaner, we will not suffer from such extreme weather events, and our energy will be greener and cheaper. Action on climate change enables us to save the planet, as well as the pound in our pocket.