Standing in Solidarity with Junior Doctors at Whittington Hospital 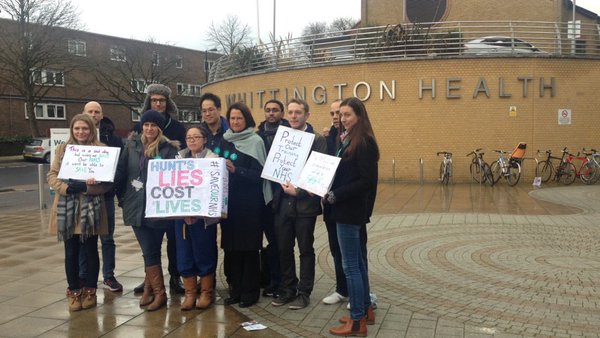 I was proud to stand in solidarity withour fantastic junior doctorsthis morning at the Whittington Hospital in protest of Jeremy Hunt’s appalling handling of contract negotiations.

I believe that the Government’s current approach is completely the wrong way forward and that they should work with the BMA and junior doctors to find a fair agreement that avoids the threat of industrial action.

Junior doctors are vital to the future of the NHS and it is clear that if we want to move toward a seven-day NHS and improve patient care we need to ensure that the staff we rely on are supported and valued.

So it is deeply concerning that the BMA have described the proposed contract as ‘unsafe and unfair’ and that the Royal College of Paediatrics and Child Health have stated that this could be ‘gravely damaging to the health and wellbeing of children’ and ‘adversely affect recruitment, retention and the morale’ of junior doctors.

I also fear that, rather than addressing the real strains our NHS is currently facing, the Government are punishing staff for their own financial mismanagement of the NHS.

I have now written to Jeremy Hunt, the Secretary of State for Health urging him to withdraw the threat of imposing these new contracts and re-engage in a meaningful dialogue with the BMA and NHS staff. The Government also need to accept that compromise is necessary to reach a fair settlement and come forward with a better deal that ensures patient safety is not put at risk.