I have now received a response from Haringey Council Chief Executive Zina Etheridge regarding the discussion of whether to re-locate highgate Library into Jacksons Lane Arts Centre. The full letters are below. 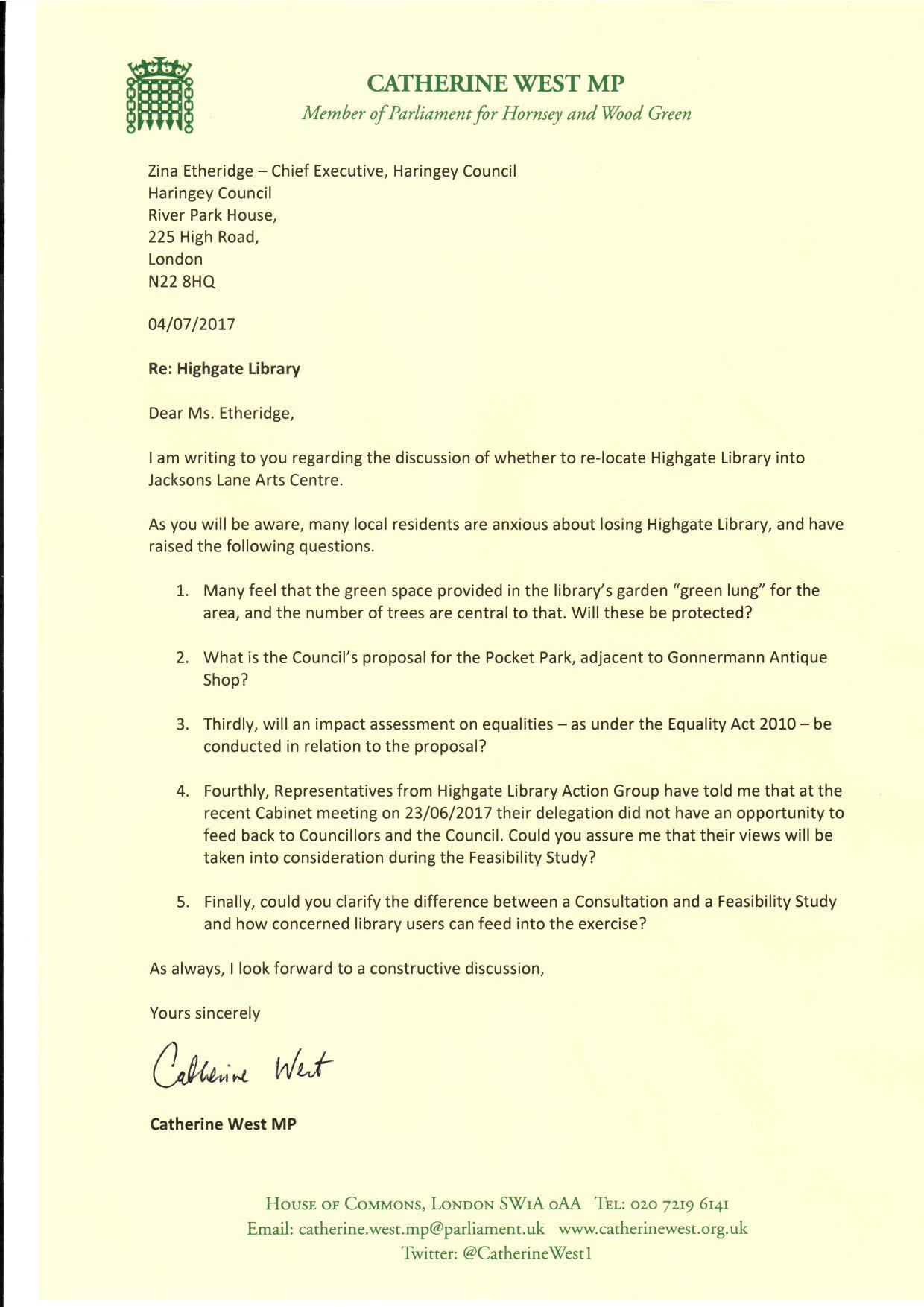 Thank you for your email in relation to your concerns about Highgate Library and the proposals from Jacksons Lane Arts Centre.

I think its important to clarify that the Library Service is not under treat – instead we are exploring opportunities to improve through a move of the Library to Jacksons Lane. There is currently a feasibility study underway which will ascertain if the move is viable. A commitment has been made that should the scheme prove not to be viable the move will not go ahead and the Library service will remain in its current location.

You asked a number of questions which I have addressed in turn below:

1. Many feel that the green space provided in the library’s garden “green lung” for the area, and the number of trees are central to that. Will these be protected?

As the Library site falls within the Highgate Conservation Area, all the existing trees are protected under that legislation. If the building was to be sold or ownership transferred we may also seek to protect them further with Tree Preservation Orders (TPO’s).

2. What is the Council’s proposal for the Pocket Park, adjacent to Gonnermann Antique Shop?

The Council’s Parks department has no current plans for this. If you have heard anything locally please let me know and I will be happy to follow it up.

3. Thirdly, will an impact assessment on equalities -; as under the Equality Act 2010 -; be conducted in relation to the proposal?

Yes, this will form part of the Council’s element of feasibility work to assess whether it is feasible from a service perspective.

4. Fourthly, Representatives from Highgate Library Action Group have told me that at the recent Cabinet meeting on 23/06/2017 their delegation did not have an opportunity to feed back to Councillors and the Council. Could you assure me that their views will be taken into consideration during the Feasibility Study?

The Cabinet meeting referred to heard 2 deputations on the issue of the library. Both deputations were heard in accordance with the requirements under the Council’s constitution. A library visioning public engagement session is planned for the 19th July where the Assistant Director and Head of Service will set out the principles they are using to inform the feasibility study. This will be an opportunity for HLAG, Highgate Library Friends group and the community to feed into the process. The Head of Libraries also has a meeting planned with HLAG and will be meeting with the Friends Group separately.

5. Finally, could you clarify the difference between a Consultation and a Feasibility Study and how concerned library users can feed into the exercise?

A feasibility study is used to test the viability of an idea or project, to address where and how it will operate, the funding needed and potential obstacles. Library users have had the opportunity to feed in through the three public sessions Jacksons Lane have already held and the library visioning session that is planned for the 19th July. Jacksons Lane are also setting up a website with information about how to feed onto the process.

Consultation covers formal and informal communication channels between an organisation and its stakeholders which might include: open meetings, Surveys, Focus groups, Informal drop in sessions.

I hope that the response above givens you and your constituents some reassurance on the issues you have raised, of course I am more than willing to discuss this matter further should you wish.