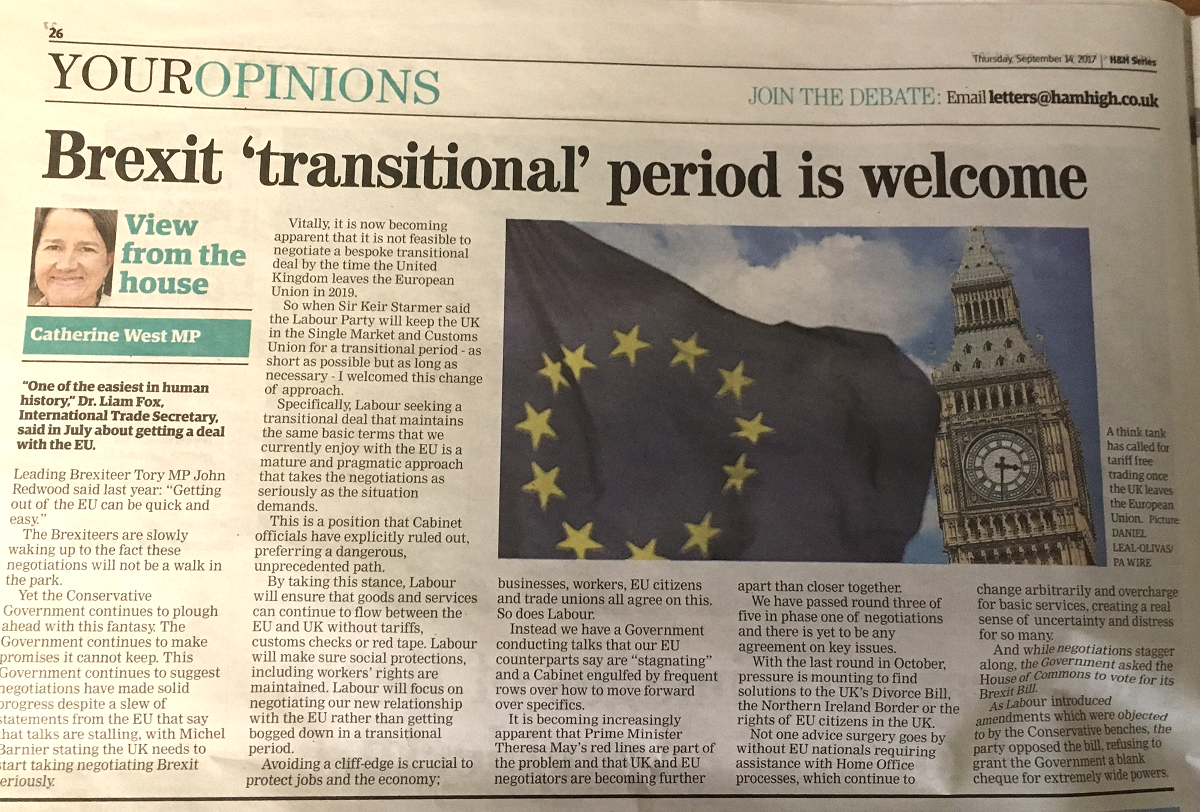 “One of the easiest in human history,” Dr. Liam Fox, International Trade Secretary, said in July about getting a deal with the EU. Leading Brexiteer Tory MP John Redwood said last year: “Getting out of the EU can be quick and easy.”

Vitally, it is now becoming apparent that it is not feasible to negotiate a bespoke transitional deal by the time the United Kingdom leaves the European Union in 2019..

So when Sir Keir Starmer said the Labour Party will keep the UK in the Single Market and Customs Union for a transitional period – as short as possible but as long as necessary – I welcomed this change of approach.

Specifically, Labour seeking a transitional deal that maintains the same basic terms that we currently enjoy with the EU is a mature and pragmatic approach that takes the negotiations as seriously as the situation demands. This is a position that Cabinet officials have explicitly ruled out, preferring a dangerous, unprecedented path.

By taking this stance, Labour will ensure that goods and services can continue to flow between the EU and UK without tariffs, customs checks or red tape. Labour will make sure social protections, including workers’ rights are maintained. Labour will focus on negotiating our new relationship with the EU rather than getting bogged down in a transitional period.

Avoiding a cliff-edge is crucial to protect jobs and the economy; businesses, workers, EU citizens and trade unions all agree on this. So does Labour.

Instead we have a Government conducting talks that our EU counterparts say are “stagnating” and a Cabinet engulfed by frequent rows over how to move forward over specifics. It is becoming increasingly apparent that Prime Minister Theresa May’s red lines are part of the problem and that UK and EU negotiators are becoming further apart than closer together.

We have passed round three of five in phase one of negotiations and there is yet to be any agreement on key issues. With the last round in October, pressure is mounting to find solutions to the UK’s Divorce Bill, the Northern Ireland Border or the rights of EU citizens in the UK.

Not one advice surgery goes by without EU nationals requiring assistance with Home Office processes, which continue to change arbitrarily and overcharge for basic services, creating a real sense of uncertainty and distress for so many. And while negotiations stagger along, the Government asked the House of Commons to vote for its Brexit Bill. As Labour introduced amendments which were objected to by the Conservative benches, the party opposed the bill, refusing to grant the Government a blank cheque for extremely wide powers.