Here’s my article about the importance of the recent Climate Change Coalition lobby of Parliament for the Ham & High in July. 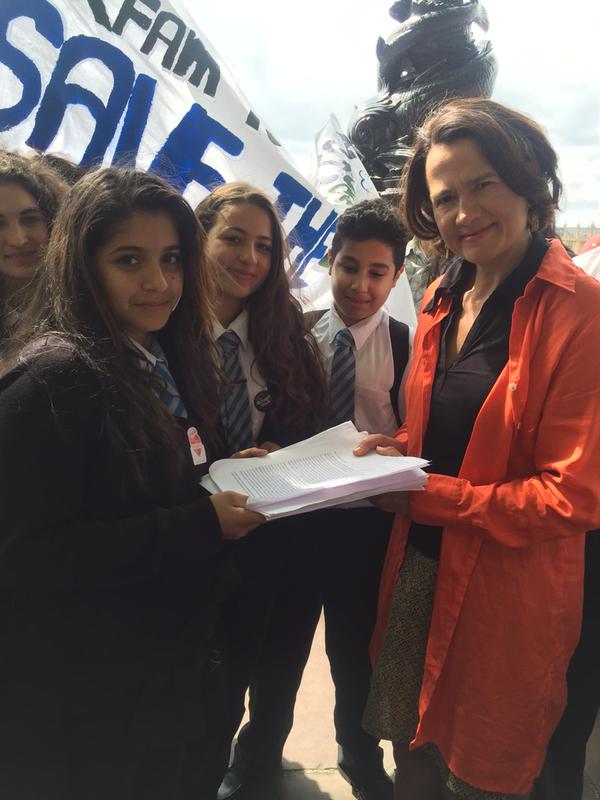 Thousands of people from across the country made their way to Parliament a few weeks ago as part of the biggest ever lobby on climate change.  They came to tell this Government to take action, to ensure clean, safe power; help for people in the poorest countries and to ask that world leaders use the UN Convention in Paris in December to reach an ambitious global agreement.

I met the big crowd from Hornsey & Wood Green, including young people from Woodside High School who’d written passionate individual letters about the threat our planet faces and the desperate need for action.  Their letters were so powerful because they are the next generation and it is these young people and their children who will pay the price if this generation fails to act.

Yet even as we were talking, inside the Palace of Westminster the Conservative Government were finalising changes that will end the Renewables Obligation one year early and make it more difficult for onshore wind farms to get planning permission.  Onshore wind is the cheapest form of clean energy and the sector supports 19,000 jobs across the UK and last year generated over £900 million for our economy.  It is a bad decision, which will cost jobs, damage investor confidence and take us even further away from hitting our 2020 renewables target.  In the long run it will also end up costing consumers more.

It is the poorest that are most affected by extremes of weather and building a more equal society means tackling climate change and protecting nature.

The UK Government should be leading by example: pushing for ambitious emissions targets for all countries to limit global temperature rises to well below the agreed 2°C target and supporting developing countries to cope with the impact of climate change.

Back home they should be doing much more to support a low-carbon economy.  It’s a huge opportunity for jobs and growth, but you wouldn’t think so if you listened to this Government’s mixed messages and policies that are seeing us fall behind in green growth investment.  We also need a legally binding target to take the carbon out of our electricity supply by 2030.

I supported a House of Commons motion tabled by my Shadow Frontbench colleagues recently which called on the Government to push for more action on climate change and as your MP, I will continue to do all I can to keep this issue in the spotlight. I hope those of you who joined the lobby, wrote to me about it or support the campaign will keep putting pressure on this Government.  We owe it to our future generations.