Making our roads safer for cyclists

I’m a keen cyclist myself and it’s great to see increasing numbers of Londoners taking to two wheels.  It’s good for the environment, healthy, quick and saves on costly travel fares. 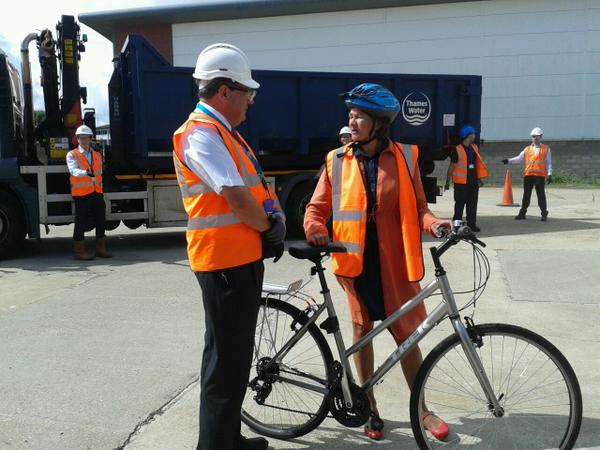 But more has to be done to make it safer. Tragically, of the eight cyclists killed in London in the first half of this year, seven of those had been hit by a lorry. I joined Thames Water cyclists at the Hornsey Water Treatment Works today to swop places with some of their HGV drivers and see what they’ve been doing to make their fleet safer including new driver training and vehicle modifications such as safety lenses, side guards, sensors and blind spot mirrors. It’s good to see a big company taking this issue seriously and as your MP and a new member of the All-Party Parliamentary Group on Cycling I’ll be pushing for others to do the same.

When I was Chair of London Councils’ Transport & Environment Committee I worked hard to make our streets safer for cyclists and the borough I led was the first to introduce 20mph zones.  I also made the strong case for increased funding for cycle schemes from Transport for London and worked to develop a scheme to reduce the number of HGVs without safety measures.  Sadly this work was slowed down by the Mayor of London’s office and the Mayor’s Safer Lorry Scheme which comes into force on 1 September doesn’t go far enough. It only requires lorries to have basic safety equipment, which most already do.

 A rush hour lorry ban -; 40% of cycling deaths involving lorries occur in the morning rush hour. Banning lorries over 7.5 tonnes between 8am-9.30am would mean the majority of people don’t have to share space with heavy goods vehicles as they travel to work.

 Improved driver vision -; most accidents happen when the HGV is turning left at a junction and the severely restricted driver vision on most lorries makes it difficult even for careful drivers. From ‘direct vision’ lorries, the area to the front left of the vehicle is more visible.

 Stronger enforcement -; there has to be much stronger enforcement against operators who put profits before lives by allowing unlicensed, untrained lorry drivers or unsafe vehicles to operate on London’s roads. In its first month of enforcement, the City of London Police Commercial Vehicle Unit found that 95 of the suspect 136 lorries they stopped had to be taken off the road for non-compliance or safety reasons, showing just how widespread this problem is.

Encouraging more people to switch to this sustainable, fun form of transport has to be done by making it safer and more accessible. It’s great to see companies like Thames Water doing their bit but we also need the Conservative Mayor of London and this Government to do more.