My week in Parliament 7-13 March 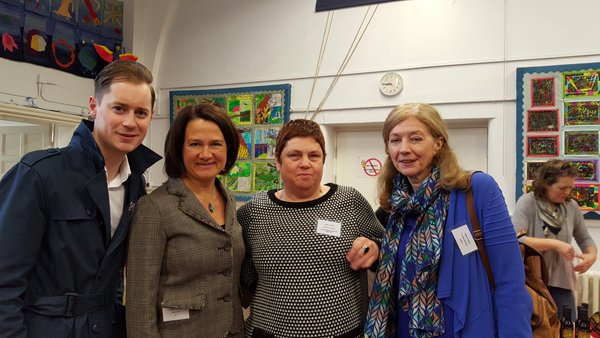 International Women’s Day celebrations were a highlight of my week, from spending the morning speaking to girls at Hornsey School for Girls to attending a Women in Engineering reception and hosting a meeting on Thursday evening at Parliament to discuss issues affecting refugee women. On the day itself, I also joined the panel on the Daily Politics to debate whether there’s a need for International Women’s Day at all anymore. Here’s my blog on why I believe it’s still so important

On Wednesday morning I joined pupils at St Aidan’s Primary School for a Fairtrade breakfast and heard from the Fairtrade Foundation some of the reasons why buying fair trade makes such a difference to farmers and workers around the world.

That same evening, I was at St Mary’s School for a public meeting on the Post Office’s worrying proposals to sell off Crouch End and Muswell Hill Post Offices. I’m extremely concerned about what these plans will means for the customers who rely on these branches, for service standards, accessibility and for employees in the branches -; as well as the wider effects on the local high street if these well-used buildings are lost. I’m disappointed that the Post Office didn’t send someone to explain their proposals at the public meeting, despite an invitation. The Post Office have to run public consultations before a franchise can happen, but that’s little reassurance when you consider that none of the last forty consultations led to the franchise decisions being halted. I will continue to oppose these plans and, together with Members of Parliament for other affected areas, am calling for an urgent meeting with the Chief Executive of Post Office Ltd.  If you haven’t already, please sign my petition.

On Thursday, I joined the panel of a Parliamentary Human Rights Group debate to discuss Colombia’s peace process and how the UK can contribute to achieving a sustainable peace. There are some very encouraging signs that despite issues arising earlier this year, the peace process appears to be on track. The Labour movement can be proud of its role in pushing for a more sustainable, peaceful future for Colombia.

My advice surgery on Friday at Wood Green Library was as busy as ever, but I stayed in close contact with my office so I could be ready to get back to Westminster for the debate on the NHS Bill. I was one of the sponsors of the bill when it was first proposed last year because I believe we need to reinstate the principles of an NHS that is truly public. The pathetic Tory attempts to talk it out meant that this important issue only got 17 minutes of debate. It’s shameful but sadly not surprising. The fight will continue and I know from the hundreds of people who’ve contacted me in recent days that there’s strong support for the aims behind the Bill to restore the NHS to its founding principles, available to everyone equally, free of charge, and without the commercialisation and marketization that we have seen under the Tories.

On Saturday I had the pleasure of visiting Highgate Wood School to say a few words in the opening ceremony of the 2016 North London Model UN conference. This event has been running for 9 years now, organized by the students themselves, and it was inspiring to see so many young people from schools all over London giving up their Saturday to discuss issues of international importance. This year the focus was on the refugee crisis.