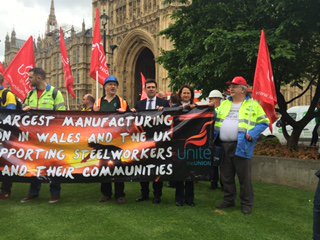 The Queen’s Speech debates continued this week with debates on defending public services, Europe, human rights and keeping people safe at home plus education, skills and training. On Tuesday, I was on the Front Bench for Foreign Office questions where the Foreign Secretary was held to account on subjects including human rights in Bangladesh, progress in the peace process in Yemen and the potential effect on the UK’s influence on the world if we were to leave the EU (something I spoke about at the Fabian Society Summer Conference. You can read my speech here.

On Wednesday, I was proud to be out supporting steel workers from around the country as they marched on Parliament to urge the government to do much more to save the steel industry.

That same evening I hosted and chaired an important cross-party meeting of the Socialist Educational Association in Parliament on ‘The Education White Paper: A Poison Pill?”, where the government ‘U turn’ on its forced academisation programme was declared to be more of a ‘swerve’ than a u turn. It is clear from the outline proposals that in future quasi private academy schools will have access to the assets of schools (e.g. playing fields) for profit. This is a worrying development and we must redouble our efforts to oppose the government in parliamentary debate and save state education. The lack of local accountability is an issue there is cross party agreement on and it was refreshing to see the commitment from Labour and Tory local government colleagues to stop the government asset stripping local schools and moving to fragment the terms and conditions of teachers and other school staff.

Back in the constituency, I attended an excellent meeting at St Mary’s School on Monday night on the vital role of the EU in tackling our polluted air. The urgent need to tackle air pollution in the capital is one of the (many) reasons I am so delighted Sadiq Khan is the new London Mayor. In the few short weeks since his election he has already announced plans to more than double the size of London’s clean air zone and joined a high court challenge against the government over its inaction – something the previous Mayor refused to do. It’s a welcome start on this vital issue for Londoners’ health.

Meeting students from some of Hornsey & Wood Green’s fantastic schools is always a highlight, and this week I had the pleasure of doing it twice. On Wednesday I greeted a group of students from Woodside High School, who were in Westminster for a tour of Big Ben and on Friday I visited Our Lady Of Muswell School to support their book week for the second year running.  I read to two classes on the theme of the evils of hunting wild animals. Year five also wrote to me and we had a discussion about their letters on climate change and how MPs should do more to tackle it.