I have received a further response from Haringey Council Chief Executive Zina Etheridge regarding the discussion of whether to re-locate Highgate Library into Jacksons Lane Arts Centre. The full letters are below. 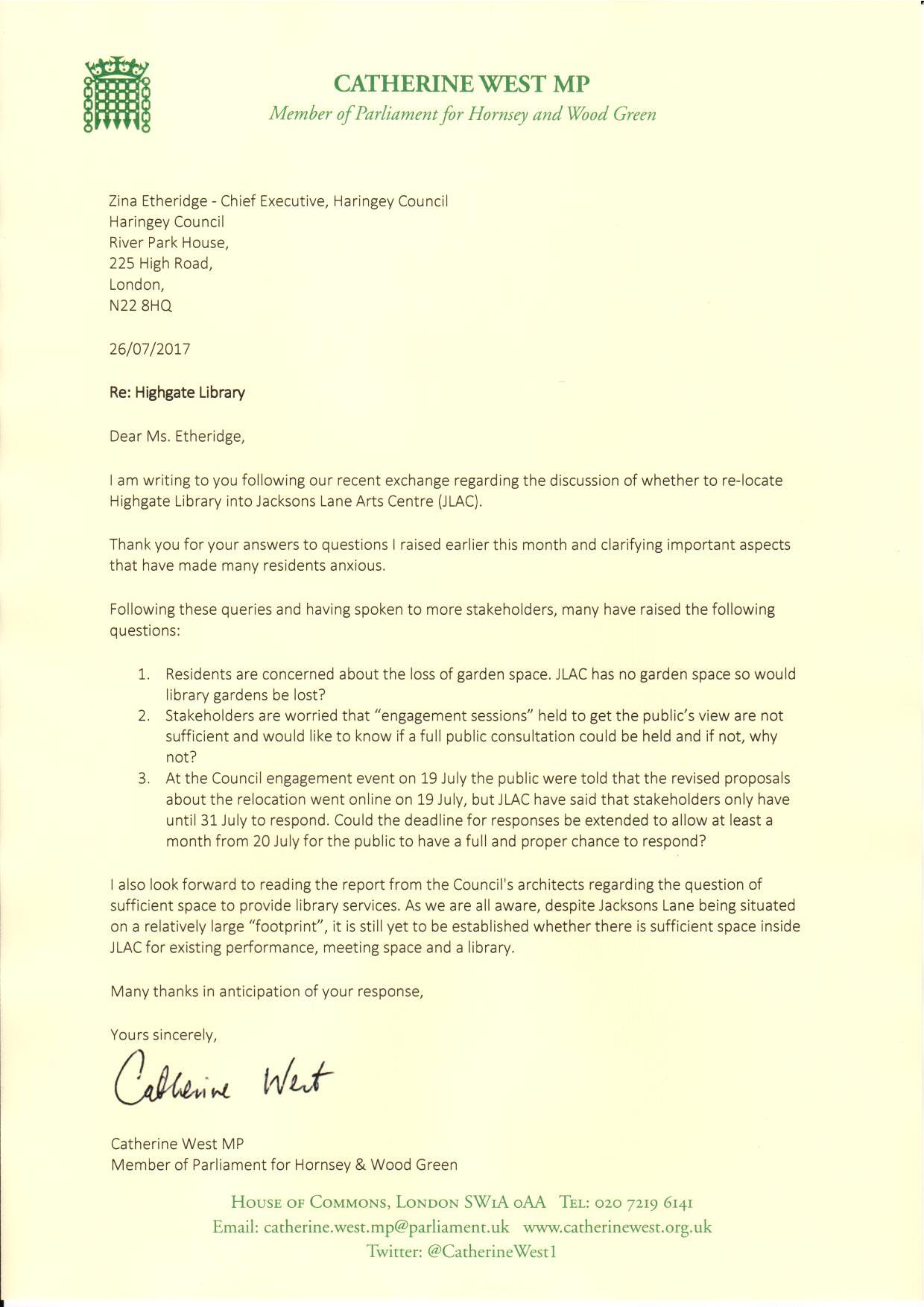 Thank you for your email with further questions about the proposal to relocate Highgate Library services to Jacksons Lane Arts Centre (JLAC). I have set out responses to your questions below:

As you know, architects Citizens Design Bureau are currently looking at the feasibility of transforming the Jacksons Lane site. As part of this work, they are looking at the potential of providing garden space for library users, and this will be considered in the council’s assessment of the feasibility study.

JLAC has approached the council with a really exciting opportunity to explore creating a local cultural hub by locating the arts centre and library service under one roof. As the council and JLAC have previously said, we are very much testing the proposal at this stage, and Highgate Library services would only relocate if the proposal continues to provide a good quality library service to all user groups.

It is not the council’s intention to hold a full public consultation on the proposal as library facilities will remain in the area (JLAC being within a two-minute walk of the existing Highgate Library site). JLAC have had a number of meetings with the Highgate Library Action Group and held drop-in sessions to present their emerging options to key stakeholders. The presentation material has been on display at the Library and placed online alongside feedback questionnaires. The council has also held a public engagement session in July to present our vision for the Highgate Library service and give residents and stakeholders an opportunity to ask questions.

If the proposal is feasible, it is likely it would be considered by Cabinet later this year. If Cabinet take the decision go ahead with the relocation, then the council and JLAC would of course ensure key stakeholders, including local residents and library users, are given the opportunity to engage with plans as they emerge.

3. Deadline for engagement with initial proposals

As I have outlined, JLAC and the council have been working hard to ensure residents, stakeholders and library users have had a number of opportunities to engage with initial proposals. The plans, which were published online by the architect on 20th July, were presented to stakeholders in June and have been on display for a month at Highgate Library. JLAC felt this has given sufficient time and opportunity for feedback, however we have since spoken with them and agreed that they would extend the deadline for public comment on the initial option plans to 7th August.

I hope this is helpful.