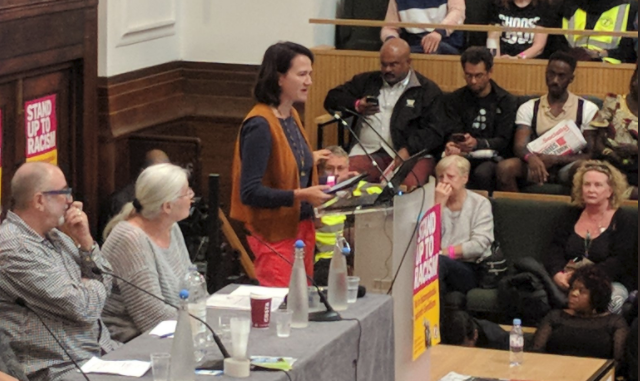 I was in the House of Commons for Home Office Questions on Monday, where I was able to ask the Government when wrongly detained asylum seekers would be released from detention centres, following the High Court’s ruling that the Government had wrongly detained people who are torture victims. The Minister said he would write to me on this issue and I will post the letter on my website when I receive it.

In the evening I attended a National Day Reception of the Republic of Korea. With escalating tension on the Korean Peninsula, I continue to believe that a diplomatic solution offers the best way forward, as I recently wrote in a letter for The Times.

As Secretary for the APPG for London, I spoke at the launch of London’s Poverty Profile on the United Nations’ International Day for the Eradication of Poverty on Tuesday. We know that without addressing poverty in London, it is very hard to address the issue of poverty nationally and that housing poverty is the key driver of inequality in London.

Later I met with a representative from Christian Solidarity World Wide, a human rights advocacy group promoting the right to freedom of religion or belief of all faiths and none, to discuss human rights in China. We discussed a report written by a human rights lawyer in China around abuses in Tibet and Xinjiang, as well as the situation for lawyers and human rights defenders. I continue to believe that the UK’s foreign policy should have human rights at its core and will stand up against violations wherever they occur.

On Wednesday the International Trade Select Committee met again, covering key issues in international trade and assessed issues from the UK’s position at the World Trade Organisation to trade strategy, export promotion and investment. At current the Government has offered little explanation of the UK’s post-Brexit trading relationship with the EU or other countries around the world. While Dr Liam Fox, International Trade Secretary, says that it will be fine if the UK falls back on to World Trade Organisation Rules with the EU, many businesses, consumers and trade unions know that a Brexit cliff-edge would be devastating for our economy and jobs.

Later was the Opposition Day Debate on Universal Credit. The devastatingly poor roll-out of Universal Credit has left many people without cash for six weeks. Labour unanimously won the motion but Theresa May has still said she will not delay the roll-out after Tory MPs were told to abstain from the vote. This follows the Prime Minister’s decision to tell her MPs to abstain on motions around NHS pay and university tuition fees in September.

I also attended a Post Office Reception to talk about how the Post Office is changing and how staff and communities will be consistently served and jobs protected.

On Thursday I spoke at the Labour Movement for Europe about the effect Brexit is going to have on workers, as well as freedom of movement and membership of the Single Market. I voted against the Government’s EU Withdrawal Bill and I have supported a number of amendments and new clauses to this bill as it moves to its next stage of scrutiny, this includes amendments 1, 3 and 5. Further to this I have supported over 25 amendments and new clauses to the bill to address a wide range of issues from retaining environmental protections, ensuring access to the Single Market, enshrining human rights law, upholding our international commitment to UN conventions, protecting for workers’ rights and importantly ensuring parliamentary oversight and key decision-making.

Over the weekend I spoke at the Stand-Up to Racism Conference on how to confront the rise of racism, Islamophobia and anti-Semitism in the US and Europe. Our community’s diversity should be celebrated, as well as the impact that immigrants have had on our economy, society and culture.

My next advice surgery is this Friday, 27 October, at Wood Green Library at 10am. No appointments are necessary.